“The Yamaha CX5 and four operator synth module allowed me to experiment with sound.
On finding a sound that developed over time I used this to form the background of what became The Flood.
In conjunction with the CX5 I used a TEAC four track tape recorder, one track of which was striped with the predecessor of SMPT time code.
This allowed the tape recorder and the CX5 to run in sync and consequently I was able to
record guitar to the synth.
All this went to a RAM 10 mixer where I could send individual independent channels to be treated with delay etc.
This was then mastered on to a REVOX 1/2 track at 15 ips.
In the years to come the tape deteriorated and requires ‘baking’.
I devised an oven heated by ‘pig’ lamp and decided on temperature of 50 degrees, keeping thermometer in the oven until this temperature could be maintained.
I then put the tapes in for 3 days and at the end of that time with drew them and allowed them to cool.
I then played the master tape recording it directly into the macG5 computer.
This meant that I had digital instance of The Flood ready to burn to CD.
This recording is what now appears on the video.”
Ricky Gardiner 2014 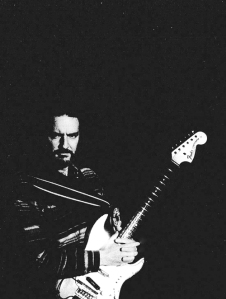